We at the Building State Capability program have the good fortune of working with amazing practitioners from all over the world, and on topics of real importance. This semester, for instance, I am working with a team of three mid-career students from Latin America on a project applying the problem analysis in PDIA to the challenge of growth in Honduras. Marco Midence is from Honduras, Jorge Jimenez is from Mexico, and Jose Arocha is from Venezuela.

In keeping with the PDIA approach, their work started with ‘problem construction’—identifying a problem statement to draw attention to the problem. It goes something like this: Honduras has struggled to achieve the economic progress needed to pull many of its people out of poverty or to create jobs for those people moving into middle income categories.

The team noted that the problem was not just low growth, but the fact that growth has been centered on low wage sectors like garments and agriculture, and there is not enough vibrant creativity in the economy to deliver growth in new sectors (especially in higher value services and manufacturing sectors). The team have data to show this problem, and a narrative to use in convening others in Honduras to discuss the problem. Part of their narrative centers on the limited impact past (and current) economic plans and consultant-written strategies have had on the country’s growth trajectory. The team shows that these plans and strategies are not as actionable as they need to be and do not provide a strong platform for addressing the problem.

With this problem statement in mind, the team then progressed to ‘problem deconstruction’ where they asked ‘why’ the problem was being caused, many times, and put together a fishbone diagram that describes the causes and sub-causes of the problem. Marco, Jorge and Jose read a great many documents in this process, written by experts in civil society, think tanks, government and multilateral entities like the World Bank and Inter-American Development Bank. They found that these documents had important information, but that every document focused on only one or two parts of the larger problem—showcasing specific parts of the problem at the exclusion of others. When one puts all the evidence from such documents together, a fuller picture shows many different causes that often interact. As a result, the problem fishbone is long, revealing just how complex the problem is, and how many different causes it entails.

Here is a short video introducing the work and the long fishbone diagram:

The team drew this fishbone diagram two weeks into our work, and then progressed to scrutinize the various causes to identify entry points for action. They employed two strategies in so doing:

We met to review this analysis today, and discussed the assumptions the team had made, and identified a number of areas for immediate attention (in categories 1 and 2) and where longer-term attention was also warranted (in category 3). The team identified the key authorizers and agents to work with in each area, and will as a next step contact these people to share their views on the potential for action. This contact is intended to draw more people into the conversation about change, and to mobilize those in the context to act as change agents. Here they are with the newly marked up fishbone. 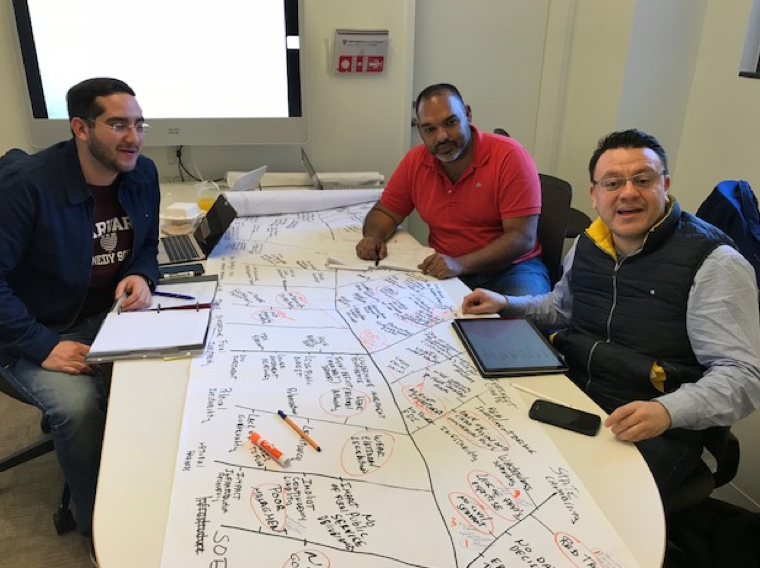 Marco, Jorge and Jose will meet with me again next week to check-in, and reflect on what they did, what they learned, and what is next. It is all very exciting: creating a growth strategy through PDIA. Watch their final presentation of this work.

Insights from Applying PDIA in the Education Sector

Applications for our Leading Economic Growth Executive Program are Open!

Guest blog by Dr. Naser Salmeen I am currently working as a Policy Enforcement Manager in the

Insights from Applying PDIA in the Education Sector

written by Salimah Samji Over the past three years, we have engaged on research titled “Understanding