This post relates to the working paper, ‘Who Wins in the World Economy and English Football?’

The Question: ‘Can We Get Game Changing Growth?’

Governments are interested in addressing many problems. In our experience at Building State Capability (BSC), the number one problem always centers on the word ‘growth’. However, the problem is seldom as simple as ‘we are not growing’. Indeed, the vast majority of countries in the world have grown in the last generation, but policymakers we work with typically want more—especially in countries that one might call low or lower middle income.

These policymakers always ask us about the growth stories of the 60s and 70s in Singapore and South Korea, and about other East Asian Tigers. In so doing, we find them inquiring about how game changing growth happens in a country: growth that generates jobs young people actually want to do (to keep them at home), that is clean and sustainable, helps countries escape donor dependence, promotes national pride, allows sufficient income for citizens to enjoy real service access (showers in homes instead of from taps a mile away), fosters social cohesion, and more.

Most countries have not experienced this kind of game changing growth—even in the last generation’s historic global growth spurt. Rather, many countries have grown in absolute terms but stayed the same relatively—maintaining their position in a stubborn world order that does not seem to support significant change. Consider the chart below as evidence. 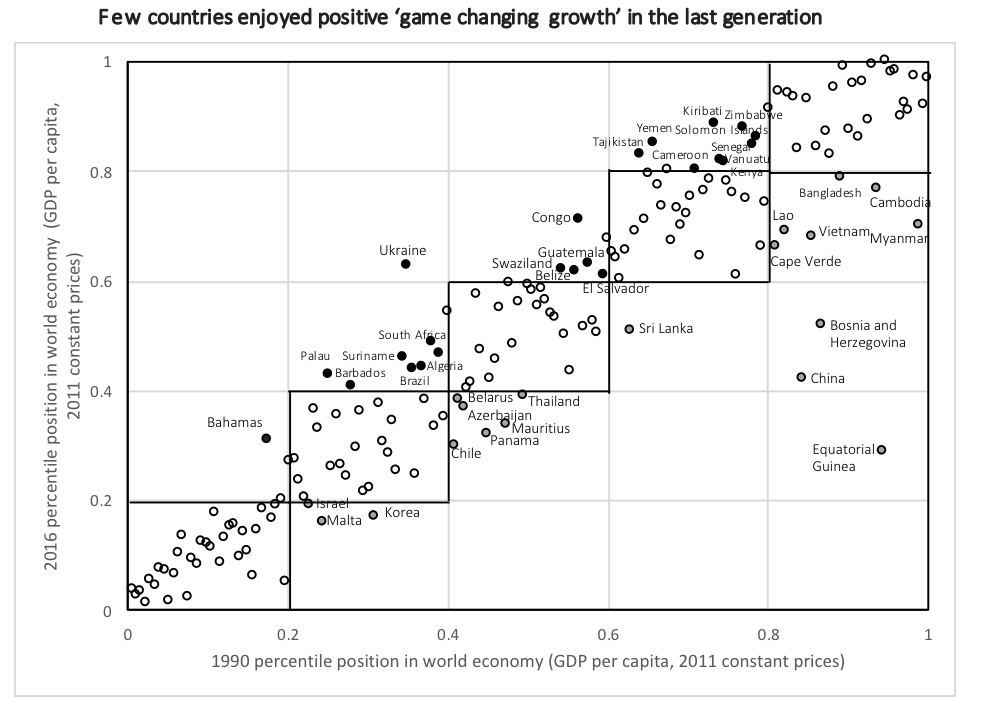 The chart shows GDP per capita percentile positions of 173 countries in 1990 (on the horizontal axis) and again in 2016 (on the vertical axis). It reveals a close relationship between country positions in the two bookmark years (even though these are a generation apart).

See examples below of countries that grew a lot but stayed in their tier—including Mozambique, Ethiopia, and Rwanda (all often examples of higher growth countries).

To emphasize the point, the countries in the first chart are organized into five ‘tiers’ (the boxes) in both periods. You will see that very few countries shifted out of their ‘tier’ over an entire generation: Only 20 countries (about 11%) jumped to a higher tier between 1990 and 2016 (the dots in grey that sit below the boxes); twenty five countries fell tiers (the black dots above boxes).

Why Does This Matter?

You might be scratching your head and asking why this matters: Who would have expected countries to ‘jump’ to higher tiers or materially improve their ranking or percentile position in the world economy? We should be happy that most countries have grown and their citizens have better lives now than they had in the past.

This could be a valid way of thinking, as long as you are not one of the policymakers itching for game changing growth in your country. These policymakers sit in countries that have grown in the last generation but are still far from changed—talented children of the new middle classes are still leaving for jobs in wealthier countries, economies are still skewed towards factor-driven sectors (where ‘factors’ are primarily unskilled labor and natural resources), the countries are still  dependent on donors for their stability, and more.

In a sense, these policymakers are saying that ‘while much has changed, more has stayed the same’ in the world economy. They have realized that the world economy is a game, and the game has not changed that much; in terms of who the real winners are and who has the means to win. And there is no reason to believe the game will change much in the future; meaning that their countries will probably still be ‘better off but not really better’ a generation from now.

A key element of the world economic ‘game’ narrative is that lower tier countries have actually fallen behind higher tier countries in terms of GDP per capita ‘winnings’ over the last generation.

We see similar experiences with respect to GDP ‘winnings’—how much of the world’s production is centered in different tiers. Tier 1 countries have enjoyed a steady 90% of world output over the last generation. Countries in lower tiers have grown in absolute terms but accounted  for the same—very small—portion of world output in 2016 as they did in 1990.

The differences in GDP ‘winnings’ across the world economic leagues

This suggests that it matters a lot which tier of the world economic league a country is in; and it  matters what the percentile position a country is located at: the winnings differ a lot depending on these positions; and the positions seem pretty fixed. Countries in lower tiers have always won less than others, and will continue to do so—seemingly stuck at the bottom run of the ladder…

Why is the World Economic Order So Entrenched?

It is reasonable to ask why the world economic game reinforces such an (unequal) order? Why is there not more shifting and churning and movement of countries up and down the league table?

These questions are particularly valid when one considers that the order of winning in the world economy is more entrenched than it is in other contexts.  Take the British Football league, for instance. It is not considered very competitive by sporting  standards—as discussed in this working paper—but  has seen much more competitive churning in the last generation than the world economy.  The following chart shows that 31% of British clubs actually improved their tier position between 1992 and 2016; compared with 11% of countries improving their GDP per capita ‘league position’ in that period (and only 8% of countries improving their league position in terms of overall GDP—production).

To explore why the world economic order is so entrenched, let’s start with a view on why top tier countries continue to ‘win’ so much more than other countries.

Think of patents. If you want to compete in the game of growth you need to generate new ideas (a means for growth). But high income and upper middle income countries (mostly China in this group) dominate the patent business. Lower middle income and low income countries generate very few patents; and the portion of patents generated in these lower tier countries has declined in the last decade (see the figure below, from the World Intellectual Property Organization, WIPO).

Consider comments by Caglar Ozden from the World Bank:

While OECD countries account for less than a fifth of the world’s population, they host two-thirds of high skilled migrants. Among OECD destinations the distribution is even more skewed. Four English-speaking countries— the United States, the United Kingdom, Canada, and Australia—are the chosen destinations for nearly 70 percent of high-skilled migrants to the OECD. The United States alone hosts close to half of all high-skilled migrants to the OECD. The attractiveness of these destination countries has led others, such as France, Germany, and Spain, to increase their policy efforts. Nevertheless, the volume of skilled migration to these four countries, coupled with the asymmetry in the concentration of leading universities, high-tech firms, and research centers, implies that the global competition for skills will continue to be unequal … What about origin countries? Many have limited educational capacities and fiscal resources to train workers or to replace those who have emigrated.

Interestingly, there is a relationship between talent inflows to richer countries and those countries’ abilities  to generate new ideas. Consider the following comment and graph  from a recent Brookings paper by Jay Shambaugh, Ryan Nunn and Becca  Portman:

Innovation is generally driven by talent, education, and funding. Immigration has been one of the main sources of talent for innovation in the United States, where immigrants make substantial and disproportionate contributions to research and innovation. Figure 7 shows the fraction of immigrants in the United States in the labor force, STEM workforce, PhD-holding population, high-quality patent-holding population, and among Nobel Prize recipients in the sciences. Immigrants make up only 18 percent of the U.S. 25-and-older labor force, but are 26 percent of the STEM workforce and 28 percent of high-quality patent-holders. Their high degree of patenting is not surprising given their disproportionate share of PhDs. In fact, 31 percent of PhD holders in the United States are immigrants.

In addition to boosting innovation directly, high-skilled immigrants create positive spillovers for the larger innovation system: Hunt and Gauthier-Loiselle (2010) find that a one percentage-point increase in the college-graduate immigrant population raises patents per capita by 9–18 percent when these spillovers are taken into account. Types of technology in which immigrant inventors were relatively active between 1880 and 1940 subsequently were characterized by more patenting and citations between 1940 and 2000 (Akcigit, Grigsby, and Nicholas 2017). 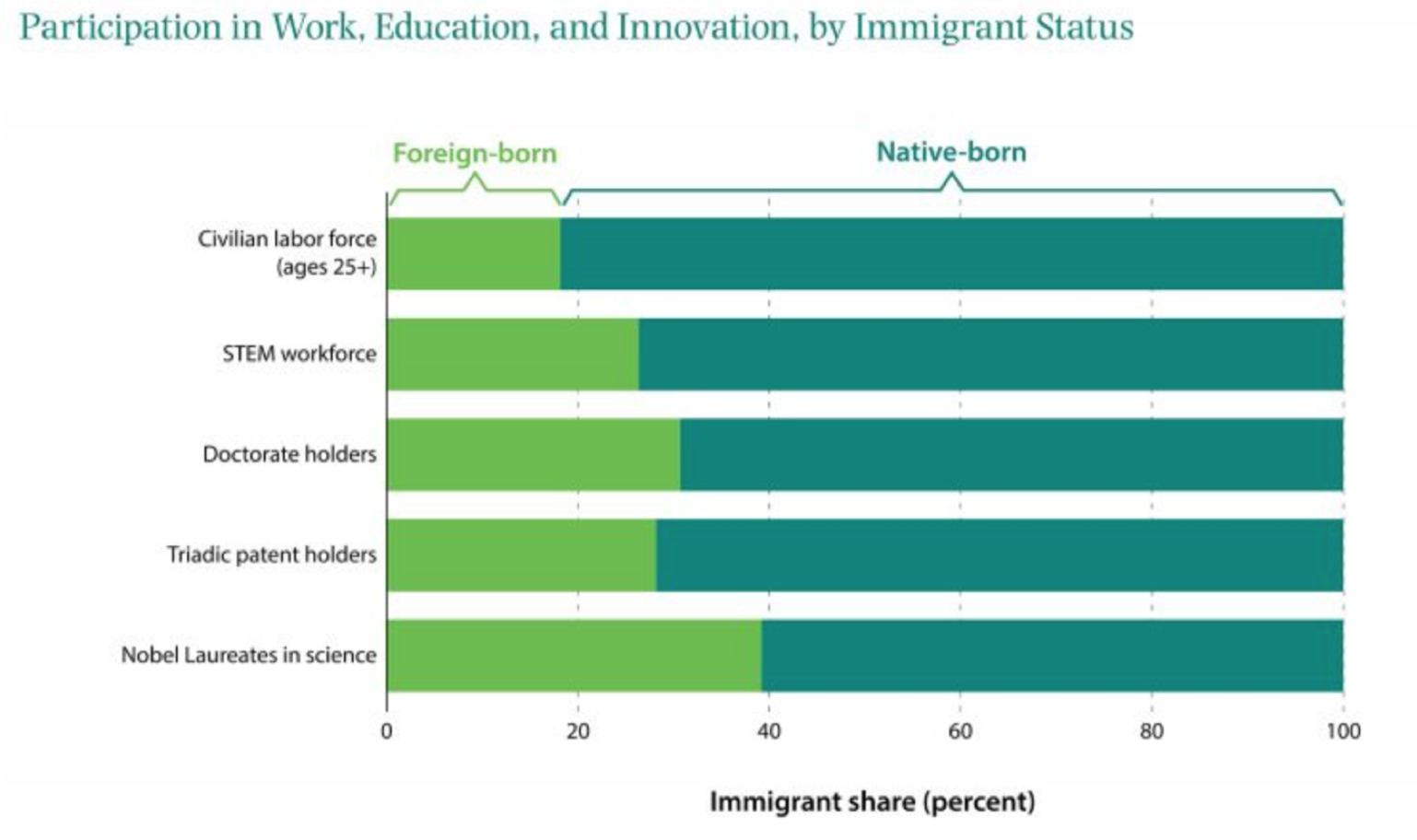 Notice the narrative: richer countries started with an advantage in terms of the means to grow in 1990 and have even more of an advantage now. Lower income and lower middle income countries have grown their economies in this period, but have not really improved their means to grow (losing more talent than before and—it appears—bleeding talent that  comes up with new ideas). The narrative holds for other ‘means to grow’ as well—like domestic and foreign investment, travel connectivity, infrastructure access, and more.

Put differently, in the world economic game, the perennial winners win more and more because they are able to control the means to win more and more over time. Few other countries manage to break out and control more of these means; even when lower and middle income countries develop new means to grow (like educated entrepreneurs), they tend to struggle to keep hold of such (and lose these means  to already wealthier countries).

This narrative is an important part of the story about rising inequality across the globe (and at a more micro level, within countries as well). In the context of such discussion, it is appropriate to suggest that the time is ripe to consider changing the world economic game—helping create more opportunities for lower tier countries to really rise up the league.

While waiting for this kind of global change, however, policymakers from countries trying to leapfrog tiers in the world economic league need to ask how they promote ‘game changing growth’ in their country. In other words, how do you help your country become a ‘game changing growth stand out’?

A place to start could be to look at the countries that improved their percentile positions in the world economy the most in the last  generation, and ask ‘how that happened’. Here is the list to review.

The Twenty biggest position improvers when considering GDP per capita, 1990-2016

The stories of these countries vary. Some jumped up the economic league because of growth in one natural resource sector (like oil in Equatorial Guinea) or in a new service sector (like tourism in Cape Verde and Dominican Republic) or in specific manufacturing sectors (like garments in Sri Lanka and Bangladesh). Others saw more diversified growth in either manufacturing or service sectors or both (China, Myanmar, Vietnam, Ireland, India, and others).

The most important question we ask is not which sectors these countries leveraged for growth, but rather how they managed to secure and build and keep the means to grow these sectors; whether talent or ideas or finances or whatever?

Future blog posts will explore different cases to find answers to this question, but for the time being the key observation is that countries CAN have game changing growth. And past experience can help us understand how this happens.

Do you have any thoughts on common policy patterns we might find when examining this past experience?