This team successfully completed the 15-week Practice of PDIA online course that ended in December 2018. This is their story.

As development practitioners, we tend to rush in with solutions to deal with complex problems. We impose so-called best practices without digging deep to uncover the roots of a problem due to donor demands and other pressures to show short-term gains. However, acknowledging that a problem is “complex” means that we first need to step back and give ourselves room to figure out how to achieve sustainable impact. We found this to be the case when confronting the problem of youth recruitment in Vaparaiso, Colombia, where we applied problem driven iterative adaptation (PDIA).

In post-conflict Colombia, following half a century of civil strife, youth in municipalities previously controlled by the former Revolutionary Armed Forces of Colombia (FARC) are experiencing an emerging threat to their well-being. Violent groups that benefit from illicit activities, such as drug trafficking and illegal mining, are taking advantage of the power vacuum, left by the demobilization of the FARC, by coercing youth to join their ranks. The small, isolated municipality of Valparaiso, with a population of nearly 12,000, is no exception. Lack of trust in the judicial system and local authorities to bring perpetrators to justice and prevent retaliation has led to a severe underreporting of this phenomena. The mayor’s office and family services are responsible for preventing youth recruitment. The municipality is further hampered by limited budget resources, administrative capacity, and information to comply with its obligations regarding prevention and response to recruitment.

This is clearly a “wicked hard” problem that we had been contemplating from six different chairs in Colombia and remotely from the US. The first task we took on was that we stopped and conducted an initial problem analysis to agree on what exactly we were trying to solve. This consisted of constructing the problem – the municipal government of Valparaiso did not have the capacity and resources to deal with this emerging critical concern of youth recruitment. We subsequently deconstructed this seeming intractable issue by reaching out to stakeholders, looking at available (although scarce) data, and continually asking “why”. We discovered a range of root causes, from law enforcement still being conducted from a military perspective to a deteriorating social fabric. Mapping out the sub-causes only further confirmed that the problem could not be solved in one go. Rather than being overwhelmed by this complexity, we realized that there was ample space in authority, acceptance, and ability that provided us an entry point in one root cause – local government, schools, parents and others did not see the value in engaging youth in solving their own problems. 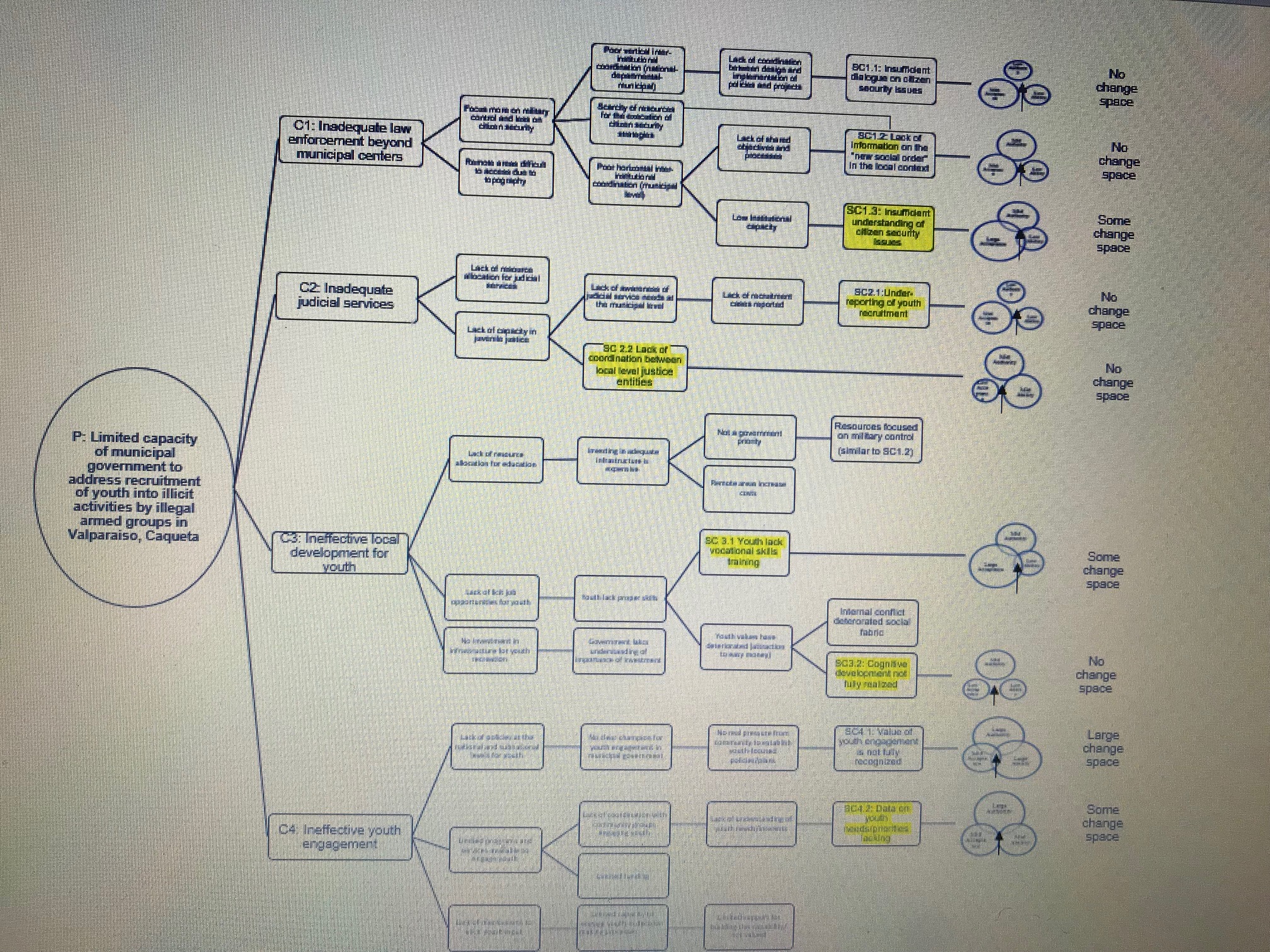 Once we mapped out the scenario, we looked for potential answers to our targeted sub-cause by “crawling the design space”. We engaged family services, schools, the local ombudsman, and other stakeholders to come up with various solutions and obtain their buy in to experiment with the options that they themselves identified. Possible solutions included expanding on existing platforms, hybrid solutions, and best practices. For example, we discovered in a meeting with the municipal secretary of government, that, although the mayor’s office did not have the financial resources, there were mechanisms that could be accessed, like standing committees, that could get us closer to solving the problem.

Armed with what was administratively and politically possible, we listened to the mayor and his staff on how local policies and projects were addressing this issue. We found that with scant information on the situation, programs were addressing symptoms, like alcoholism, rather than dealing with root causes. Our fishbone diagram showed him what the main problem involved and proposed practices and deviances from his current strategy. He provided us an opening to experiment with his staff. We knew that we needed to quickly show some progress to maintain his commitment over the long-term.

We acted only once we had taken this full step back. In three cycles we used the information gathered and the relationships built to design small steps to promote youth engagement by the local government and others. After each cycle, we reviewed our assumptions, noted lessons, and adjusted our activities moving forward. In our first iteration, we briefed the mayor’s office on their responsibilities under Colombia’s legal framework for youth policy which recognizes youth as legitimate actors in local development. We also began to identify youth groups to participate in providing input into the creation of these policies. This not only led to increased awareness of the value of youth input, but also led us to begin, in the second iteration, to focus on an additional sub-cause – lack of data on youth needs and priorities – where we previously had less space to operate. Public officials began to realize that the best way to collect this information was from youth themselves. The mayor also committed to further action including training his staff on the legal framework, developing an action plan to hold the election of a youth municipal council, and the creation of a youth platform hosted by the local ombudsman.

Our team’s application of the PDIA process was not easy. We were hampered by communications challenges, conflicting obligations, and an initially reluctant mayor’s office. What kept us together was the opportunity to collaboratively apply a process to deal with an intimidating problem by breaking it down into smaller, manageable pieces with quick wins that brought about engagement with authorizers and implementers as part of the solution. As some team members have had to move on, PDIA is now finding its way to rebuilding social cohesion in Yemen, improving the way assistance is provided to gender-based violence victims in Colombia, and continuing to chip away at youth recruitment by illegal armed actors in Colombia. The process led to the emergence of new ideas and actions, prospects for making development interventions sustainable, and, as development practitioners, increased confidence in our own ability to take on complex problems.