This team works for the Government of South Africa. They successfully completed the 15-week Practice of PDIA online course that ended in December 2018. This is their story.

Our PDIA journey started quite innocently with us seeing it as an escape from the routine of the everyday run of the mill challenges of public service.  We thought we had a chance to engage with something theoretical, relevant, but ultimately which would remain an intellectual exercise.  We are now PDIA converts, for the first time excited about the potential for practical change in our bureaucracy!

During the individual submissions, we were ecstatic about what we were learning. Reality crept in when we received our first group assignment. By assignment 7, frustration set in as we faced the challenge of deconstructing our problem.  We learnt that our initial problem construction was inadequate and weak. The reality was hard, particularly in drilling down to answer analytical questions of why it mattered, to whom; and who needed to care more.

We learnt that we could not fast forward to a solution, which is a typical, default behavior. This was new to us. For the first time we had to think deeply, about the need to unpack the problem, using the tools to which were being exposed.

This was a novel way to think about the problem and we recognized that our first iteration had matured into something else, see Figures 1 and 2 below. The exercise helped us get to the real problem (figure 2). 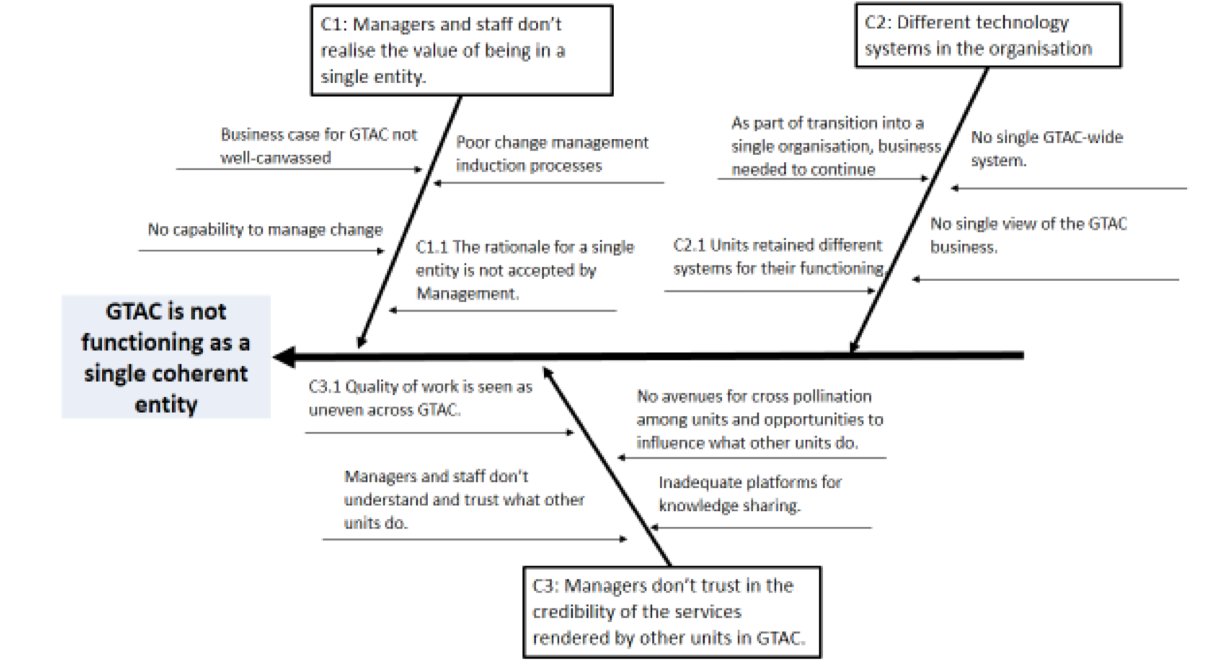 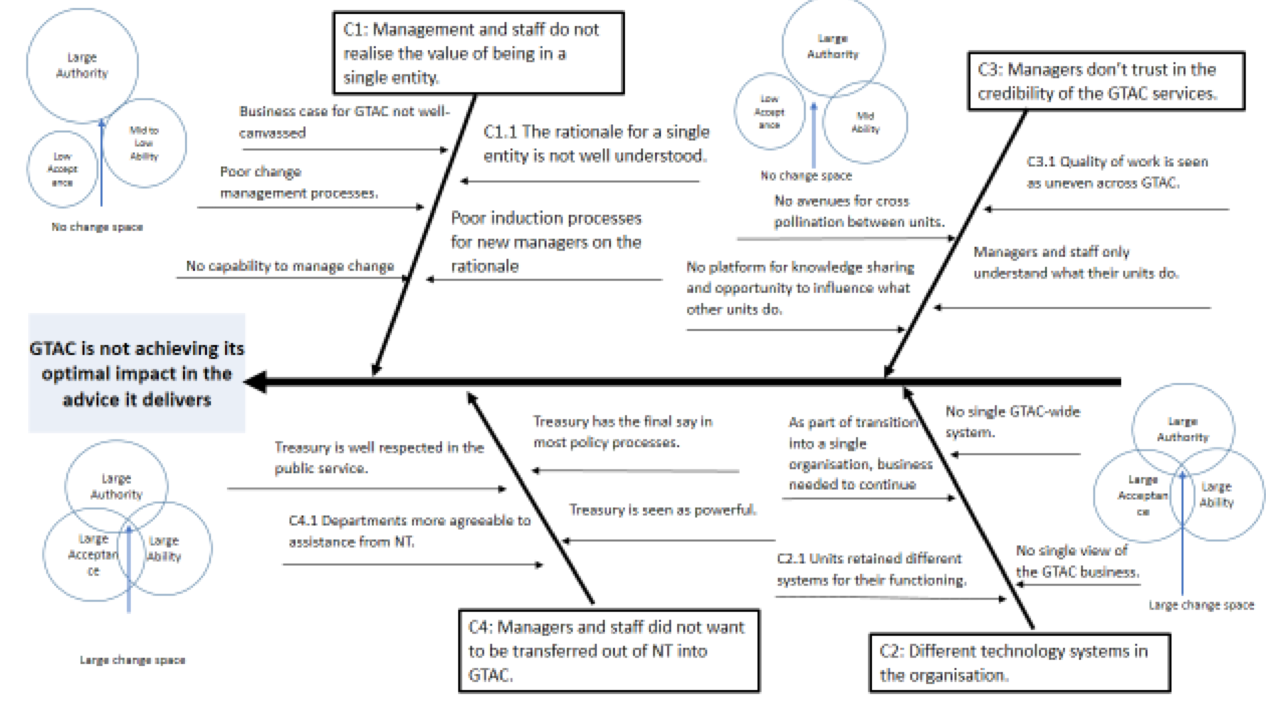 Thirdly, we found the AAA tool incredibly insightful and useful in providing a frame for how to find the path of most impact to resolve a problem. It provides a simple, unique and powerful way of understanding the space that exists to solve a problem. It dawned on us that there was a way to start resolving something immediately. With great excitement, we recognised that we could act, where we held authority and ability.  Also empowering was the fact that we could see how to ‘grow’ those spaces where potential for change was low. As simple as this sounds, the fact that we could work incrementally, and were not powerless, was incredibly affirming.

However, at this point the team began experiencing bubbles of tensions and the opportunity for a check in on our norms was timely. We addressed areas of discord that had started bothering us and issues were addressed openly and honestly. We emerged stronger as a team as we embarked on the iteration stages.

Solving a problem is like peeling an onion (this involves tears too), but once we got to this stage, possibilities’ abounded and levels of energy skyrocketed.  We updated our fishbone diagram to reflect this our new found understanding. 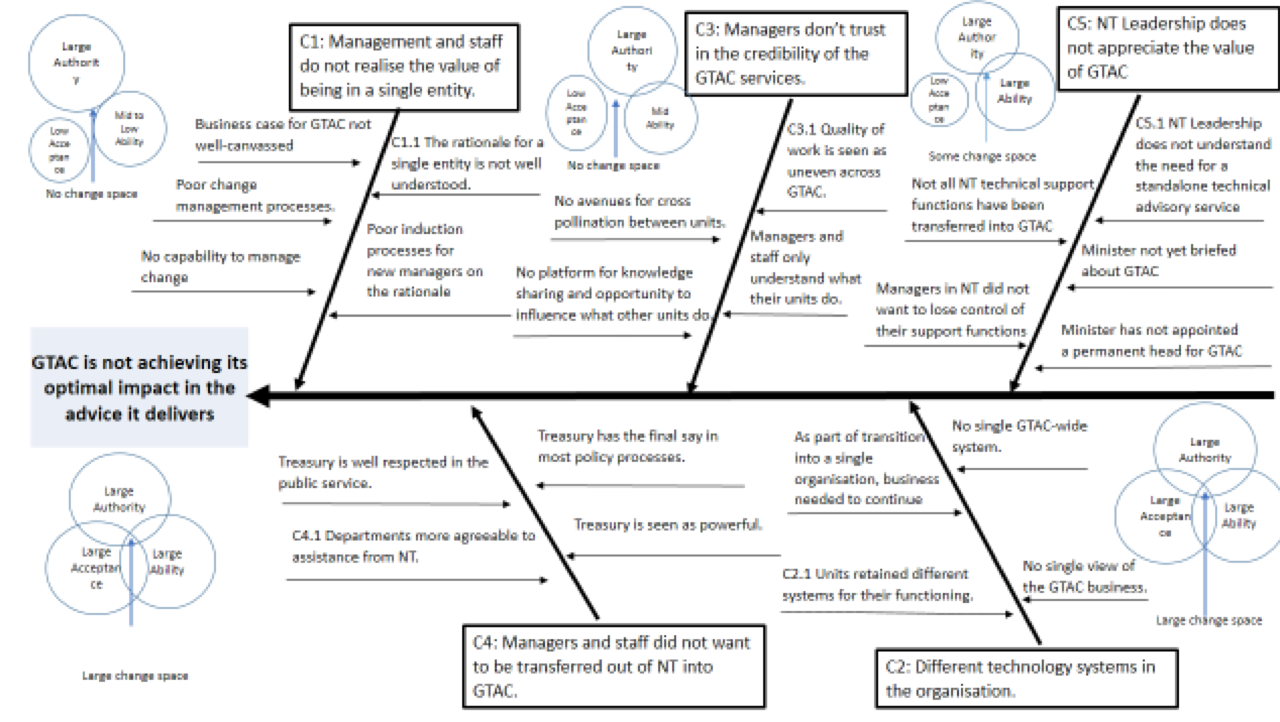 Progress we made and insights we gained

A problem that seemed intractable started to make sense. The use of the design space methodologies especially in pointing us to entry points for change, made it possible for us to identify a practical approach to solving our problem. The first iteration yielded practical steps that involved others in the organisation. Our energy and confidence is high. The first action steps were small, realistic and practical. Because it was doable, it created a tangible mood of excitement and achievement.

As authorisers, we could brief staff members to act on the action steps identified. We also recognised the need for broader consensus among leadership. As we determine the agenda of this meeting, we were able to table the discussion to the management committee meeting, the highest collective decision making structure in the organisation. This check-in is an important additional action step because we then were able to present an existing technology system to this team. There was much excitement and importantly, agreement, on a single system of information which could be scaled up to ensure uniformity. The fact that a system existed already created a sense of possibility to get it done seamlessly and quickly. It has halted the initiatives pursued by some business units who were beginning to invest in their own systems, which would have perpetuated the problem.

We will continue to iterate because we see the potential for real organisational change in the actions identified. More importantly, we will introduce PDIA to at least three of the business units that are under the direct control of the team members. One of these is the unit responsible for strategy, which we see as an important lever to shift things across the  organisation.