In 2011 the World Development Report shed some light on the extent of the challenges that drive premature load bearing, a concept discussed in earlier BSC blog posts. Among hundreds of figures presented in the Report was a simple table that showed how long it should take for so-called fragile countries to achieve a “decent”  level of governance. To define that “decent” level the author, Lant Pritchett, used the World Bank’s World Governance Indicators and assessed how many years it would take until fragile countries hit the threshold of governance quality of the top 40 percent of the best performing countries, this was a score of 6 on the scale of 0-10.[i] The results of the exercise were somber:

The results suggest that more robust leadership will be instrumental if those countries are to achieve a satisfactory level of governance. If fragile countries were to continue at their current average pace they will not pass the threshold in any foreseeable future. Even in a very optimistic scenario, in which the fragile countries would all at once start improving their institutions at the pace of 20 best performing countries (the likes of Singapore, Taiwan, Denmark, and Canada), it would still take three decades to accomplish. This is the case even though that threshold only denotes a decent level of governance (i.e. not even the level that people in the most developed countries enjoy). Progress, even when rapid, takes place at a very slow, organic pace and even when strong leadership is present it might take a whole generation to bear fruit.

The building of institutions takes an objectively long time in every society. This creates a natural tension between the slow, organic nature of the process and the target-setting culture and short time horizons prevalent within the developmental aid sector. Donors expect to see their expenditure have immediate and tangible impact. Alas, the realm of what is possible in such limited timeframe is itself quite limited.

An overambitious streak of reform programs in developing countries can easily lead to premature load bearing. Saddling fragile countries with an impossible laundry list of deep-cutting reforms is equivalent to setting them up to fail by overwhelming their political framework and implementation capacity. When we ignore this, we run the risk of attenuating the ability of these countries to see through any reforms. What follows is oftentimes social disappointment, breakdown of trust in government, and switching efforts to simulating progress to keep donors happy, rather than actual reform work.[ii]

To see if the trends of the past decade paint a different picture, I redid the analysis using the latest data. The WDR 2011 used the data at hand, which stretched only from between 1996 and 2008. Much has happened since then: global economic expansion was replaced by a protracted economic recession in the OECD, the Arab Spring came (and went), and voting for political strongmen came back in style–to mention only some changes. Overall, they reflected negatively on the situation in fragile countries. The gap between their situation and the “decent governance” threshold has actually widened for all indicators except one – Voice and Accountability, which improved somewhat. One caveat about the figures below is that they do not capture some of the successes of the most recently reforming countries over the past 2 years. Still, those humbling results are consistent with the idea that expecting great leaps forward in terms of institutions quality is misplaced.

Voice and Accountability is the only indicator that defied the trend. This might reflect the rise of communication technologies in general and free speech liberalization following the Arab Spring in some MENA countries in particular. Regarding the latter, while the overall situation deteriorated in Arab countries, the political visibility of diverse social groups has improved. Those occurrences reveal how sometimes institutions can improve due to black swan-like events that disrupt the long-term trends and set in a new dynamic. Still, those are very rare. The past experience suggests that improving institutions will remain a slow grind forward regardless of available technologies.

Tunisia, the starting point of the Arab Spring, can serve as a case study in the meteoric rise of Voice and Accountability accompanied by a marginal shift of other indicators. The pre-2010 negative dynamic was disrupted by the events following the revolution, creating a non-linear upward trend. The pace of improvement in freedom of expression and politicians’ accountability to the public has since slowed down, but the country is still on a track to hit the threshold by the mid-2020s. The other five indicators were experiencing a similar downward dynamic before the revolution. The Arab Spring ushered in a positive trend shift but the changes have been marginal and the indicators still have to recover to their levels recorded in early 2000s. Control of Corruption serves as a good example (see below). 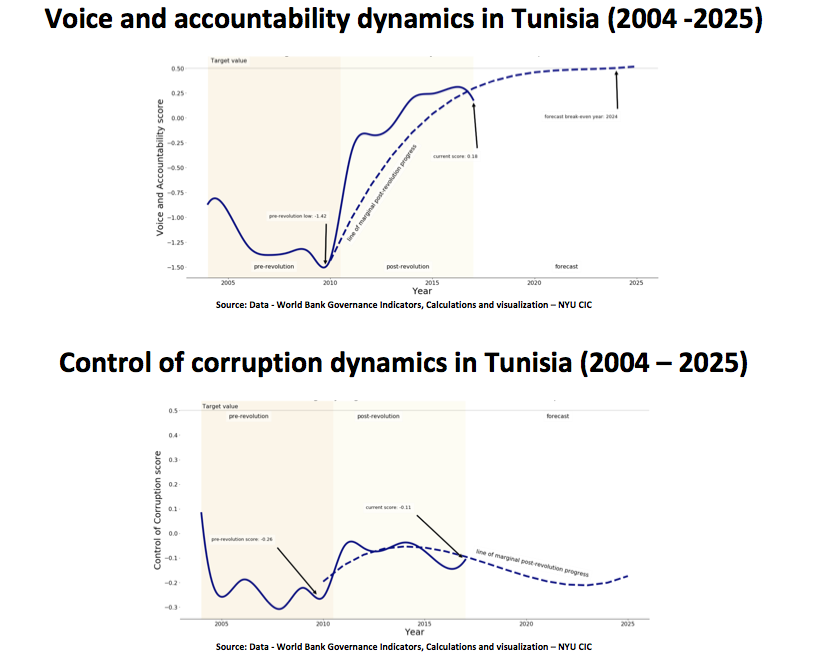 The updated analysis of the governance gap in fragile countries offers a humbling lesson on the realistic pace of progress. The space for growth is limited and overstretching it can easily backfire. While black swan events such as the Arab Spring have the capacity to disrupt the dynamics and rapidly elevate some of the indicators (e.g. Voice and Accountability), for most dimensions of governance, the progress is a slow, organic process. It follows that the optimal approach would be to focus on solving locally raised concrete governance problems. This might bring better results than pursuing an array of ambitious reforms aimed at achieving a momentous improvement of institutions in a few ambitious leaps.