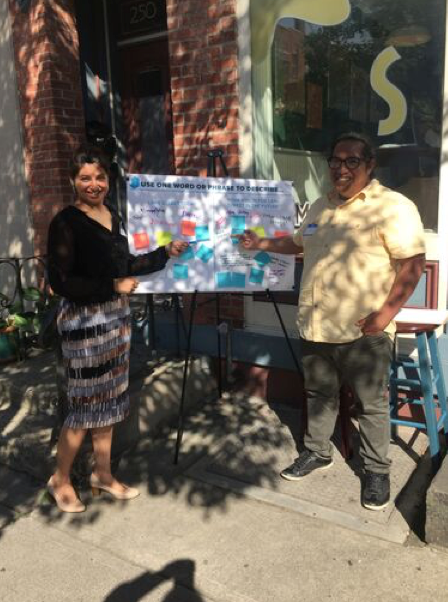 At first I was not sure how PDIA would be applicable to what I do as an urban planner, but as I listened to Matt’s first lecture about why policies fail, lightning struck. Over the years I had witnessed the adoption of many policies that were not successful for a variety of reasons, and often as one of the people responsible for implementing those policies, I felt that I was set up to fail. I knew that a flawed policy could not be implemented to achieve its original function but I didn’t have the tools or vocabulary to communicate this to those who mattered.

The key takeaways from the course felt so obvious after the fact – why wasn’t everyone already doing this?

Through this course I was able to understand a few important things about my challenge of plan implementation:

After I completed my fishbone diagram, I chose an entry point that I could work on right away. This is one of the really great aspects of the diagram – that I could see all of the possible entry points and then choose some that could be achieved in the near term and the far. The first entry point I chose was public outreach because it was something I had control over and could make changes. The public outreach that had been done in the past was very traditional and consisted of evening public meetings with a formal presentation and Q&A. Like many cities, the attendance was commonly limited to retirees who had time to get involved with local planning projects. Often, the same group of about a dozen residents would predictably attend every meeting which meant that we were not reaching every other demographic in the city.

What I did to change this was to decentralize the meetings by holding several smaller ones located at the site of the project at different times so that people could come in and out without having to spend over an hour at a meeting. We made online commenting easier and publicized events on social media. The changes we made were felt immediately as we saw more people of various demographics commenting and sharing the events. One person even said that an event we did was cool! Witnessing this change motivated me to do more, and because I had a success my authorizers were interested in hearing more of my ideas. Through this course I was able to do two major things that changed the way I now take on problems: use the process I was taught and show the process to other people that I needed help from. Others were very impressed with the thorough nature of PDIA, and as I walked them through my thoughts and what I had done the sheer magnitude and organization of the process was something people wanted to get behind. This made it easy for people to say yes.

My words of wisdom regarding PDIA are to let the process carry you. Clear your mind of all of the reasons why you can’t accomplish something. This tool is more powerful than anything you’ve used before.