I applied for this course as I was seeking clarity on best practice and innovation that would support my organization. The issue that I had identified was the methods that the Bahrain government adopted towards addressing, designing, advocating and implementing public policy initiatives. I was seeking ways that my organization, the Bahrain Economic Development Board (BEDB), could be an effective part of the government process.

The Bahrain Economic Development Board became an advisory body (exclusive to the government), to support policy advocacy and policy implementation. This came after a major restructuring of the government. However, I found that our role could be more efficient.

I felt that we, BEDB, require adding value, as I saw a standard approach towards any policy. This is done through a single project manager, where he/she would request for a benchmarking activity with issue in hand. No innovation nor engagement processes, which is commonly used internationally.

I saw an opportunity in this course. Little did I know that this was going to be a life changing experience. I felt excited once I was accepted into the program. The excitement had no limit, but I was concerned about whether this course would really benefit my hunger to bring some more effective methods to how we, in Bahrain government, deal with policy development and/or policy change.

The method of which the course started had enabled me to start with enthusiasm, especially the course material and videos which we had before the start of the course in Boston.

Also, it will be unfair to limit learnings of this course to few. I would start with the main word that attracted me to this experience, “iterative adaptation”. I have been practicing policy development and change, where I had understood some part of the Iterative Adaptation; however, this has enabled me to have a clear path towards employing it and involving teams in such an approach. My colleagues in this course were amazing, they shared all their views and many success, and many times, failures as well. This was an amazing experience and learning curve for me.

Another amazing and important takeaway for me was psychological safety. This has impacted me a lot, to the level that it was the first matter I discussed with my organization when I returned home. Having the safe environment to talk, engage and say your opinion without been concerned about the consequences. This, in my humble opinion, is the base of which any team could function, learn and able to be effective in highly sensitive job.

This is a great, short and sweet ted talk on psychological safety

However, providing the technical tools was vital to ensure that we will be practicing our PDIA in our countries. What better than the fishbone.

Building the fishbone, has impacted the way I have applied my policy concerns over the last 5 months. Not only constructing and deconstructing the problem is where we must focus, but most importantly, the people/teams/organizations/governments that are involved. Yes, relationship is something that I have always understood to be as a backbone of the policy implementation. This course had given me other dimension of focus, where enabling organizations to lead in project does not mean that I have lost control. Enabling others often increases the process of learning and enhances the probability of reaching the objective of the policy. 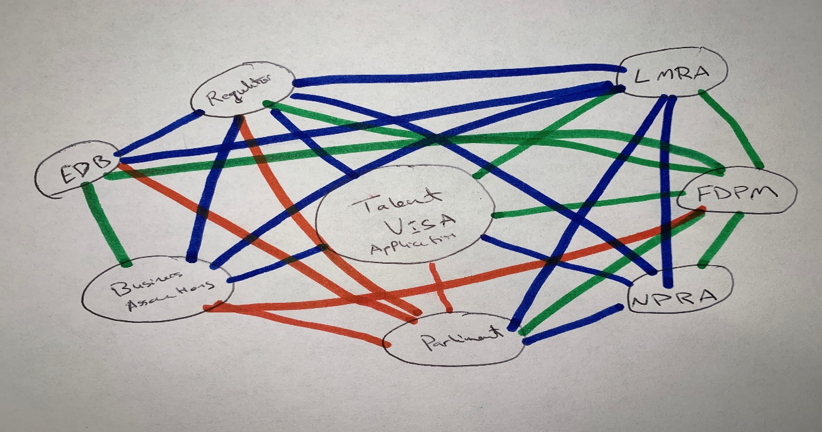 Going to my problem, I had progressed, I had a list of assignments and focus areas from my fishbone. Those are as follows:

Things started very positively, however, every policy hit a wall at a certain stage. My policy, hit 3 walls.

Wall number one: Ownership and Roles

The government issued a decision for several entities to address an issue or set a policy. In my case, the entity that was part of this decision was focused on leading and completing the project. I have applied a number of techniques that I learned from the course, which had a positive effect on the entity. This was making the leader to be the connector. This had made them more attracted in involving other teams and able to digest (learn) from all.

The connector was not of the idea to involve the private sector. I have taken the lead to engage number of private entities, as well as politicians. Got their ideas and communicated some to the connector. This had motivated them to look further into the issues, and finally got them involved. Instead of having our view in the policy, we had insured that private sector is aligned and politicians could advocate to communicate to communities.

Unfortunately, our past CEO had changed, and the new CEO had stopped the work on all policies until further notice. I could move the issue through a number of meetings, which I lobbied to activate policy development section.

Nonetheless, there are number of issues that I have faced with, which could be concluded with resistance of change. This is something I have learnt to adapt, especially in our region. Change is not something that is easily accepted but has become a method that my team and I find as a motivation. Pushing toward positive change enabled us to put the learnings from this course in to practice.

To jump walls, you must be motivated. And in many time you need to be motivational for teams and yourself. In my case, I was motivated by having other members of the team being more engaged and willing to share the opportunity of developing policies with other team members. Another motivation was the calls we had during the course. In the time where I was demotivated with the new CEO approach, the team had given me ideas and motivated me to push forward. This had taught me to seek support during good and bad times.

To jump walls, you have to understand and apply your knowledge; in this case, what I learned from this course. I have tried to apply whatever I learnt from the first day, post Boston. My approach was to gradually introduce parts of the learnings whenever there is an opportunity. For example, the first meeting I had, was with Talent Management Team. The reason for the meeting was to introduce the environmental safety concept to our organization. The result was amazing, TM had agreed on reviewing the appraisal methods and introduce learnings as part of employees’ appraisal.

To be active in PDIA, I need to educate people of the concept. I have started with my internal team, where I took them through number of PDIA concept. They were encouraged of the concept and started to adapt number of technics. This was the most important thing to me, develop the team that would spread this message. Next step to engage external teams, which I have been doing on small scale.

To jump a wall, you must be someone to push yourself to that difficult edge of the wall. I highly recommend that we keep some sort of support team, this team will always remind us of our goals and objective. This will motivate us in the days that policy development looks like a war zone.

Traveling the World via the Building State Capability Blog

Guest blog written by Dana Radojević and Lauren Truong Four months ago, we set off on