I came to the program thinking I had a good idea about how to make things happen in the workplace. I had some idea of policy implementation and the challenges of government organizations. All that said, I learned that I did NOT have an organized, step-by-step approach to address the myriad of challenges of this work. From what I have learned from others in the program, the situation we face in a U.S. District Court of New Jersey is not unique. I thought I was probably going to embark on some major training program that could be imposed from on high to the masses.

Wow, was I wrong.

There are so many things I learned in the last six months that it is difficult to name them all. I had become frustrated in my position as it seemed as though I had a small sphere of influence to make changes in a workplace that I value so highly. I came to realize that I had more influence than I thought because of the success of a Succession Development Program implemented three years ago. My authorizers perceived it a success because we completed this two year program, not necessarily for any objective reason. I consider it a success because out of the last eight supervisors promoted, seven successfully competed that Program. We were on to something but we weren’t exactly sure what. I chose the IPP team from that group, asking them: what do we need to do to plan for the workforce of the future District Court? How do we create jobs that millennials want? How do we get employees to be proactive on the job, solving problems, suggesting improvements, taking work off of their supervisors, not merely doing what they are told? How do we support managers/ supervisors so we can stem the tide of early retirements, resignations and burn out without implementing a program every two years in a panic?

I began what the team jokingly refers to as “Theresa’s listening tour.” I finally stopped reading the literature (OK, not entirely) and started asking questions. I had the team work on the first fishbone exercise with me. I had them ask their staff: what is needed for employees to do their best work for the Court? I asked the same of the other supervisors who aren’t on the Team. And I was surprised at how they really opened up. They appreciated that I asked and listened. Then I implemented what I could quickly, and again, they showed an increased connection to the work and to what I was asking. 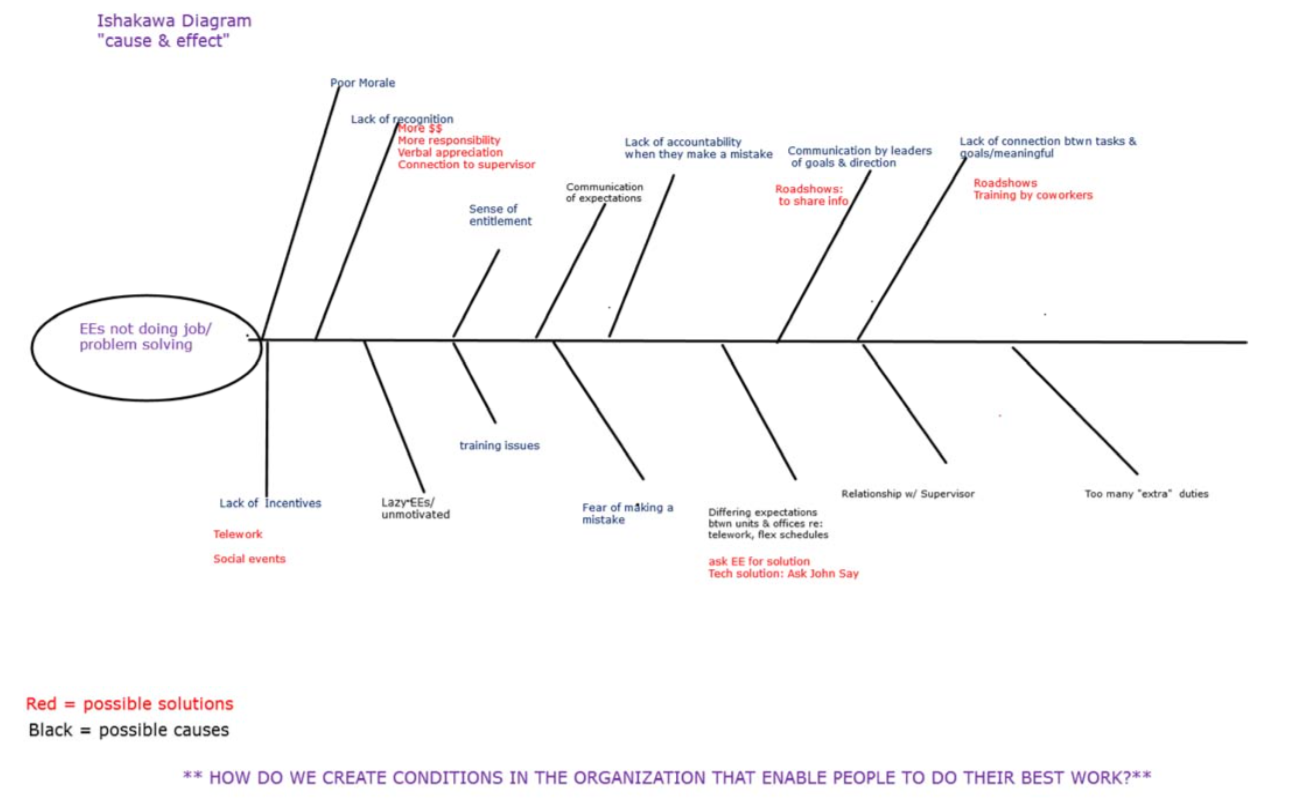 Oh boy, maybe some of the problems related to how managers/supervisors feel about the work is in part my fault (and other senior managers’) who think because we have been around a long time, we have heard/seen it all. We assume that everyone understands the importance of the work. We assume that we know best since we have been caring about the Court for decades. No wonder millennials say “OK Boomer.” So, I would say a key learning has been to more freely admit that I don’t have the answers but show that I care enough to keep asking (why, why, why, why, why) and listening. I have seen a change in supervisors who see that we are trying some of their ideas, ie, quarterly video conference meetings for all staff at once in the different offices, training and individual coaching sessions for supervisors, more training opportunities for entry level staff, more communication about the budget situation (even when all I can tell them is that we won’t know until December 21st). The Team members reported some of the same: that just starting the conversation with staff has made a difference, and they in turn have become more aware of what staff need. It seems that just the act of asking and listening and trying is changing the workplace.

I have learned that perfection truly is the enemy of the good. (Thank you Voltaire.) It seems to prevent staff from suggesting new approaches or trying new things. You can’t iterate if perfection is expected. While we strive to do the best work we can for the public, attorneys and judges, it isn’t brain surgery. Looking at what the organization needs in a ‘big picture’ way instead of each minute detail of each task added some much needed perspective.

I now tell people that what we need is for them to think and suggest, that they are the experts. In a big organization we are ALWAYS putting out fires, correcting other federal agency’s issues. I now emphasize that mistakes will happen, let’s correct, learn and move on. I tell staff that I expect them to tell me when I am wrong. This change in emphasis has reduced the stress on the supervisors who generally do very good work. I’m working on the other senior managers who expect perfection, are very critical and want a ‘bright line’ rule for every personnel situation.

In addition to better and increased communication, this process has also brought to light – through the Team’s work – that we need to address our performance management system. My next step in this project is to direct the Team’s attention to develop the administrative support that will allow us to substitute the conversations they are having with their employees for some or all aspects of our performance management system. These conversations are driving performance of staff so it is what we need to institutionalize instead of the once a year review that EVERYONE hates.

Through my ‘listening tour,’ I have become more aware of the history of our office. When it was only 30 or so employees, it was natural to manage by personal interaction. Now we are 170+ with a growing workload and a political situation of no new judges being nominated by the President. These are trying times; we have to manage often times from afar. What seems to make everyone feel better about it is the personal interactions. So I have changed my approach, asking lots of questions and taking it all in. We have hired many employees lately, and I believe we are getting better at hiring people who are continuous learners. We are promoting to supervisory positions people who can admit that they make mistakes; they have the ability to reflect on their role and how important it is to their staff.

In the last two months, I had a serious employee misconduct investigation that lead to disciplinary actions and a dismissal. While this additional work has been staggering for me, I can see that I have gained greater respect from my supervisor. He is very supportive of me, creating a more transparent, organized approach the work and to managing employees. He has supported my every request. His very public support of me has given the Team a morale boost: they can see that we have high standards and that everyone has a role in maintain those standards. They see that we all work diligently. It has renewed my motivation to continue to search for solutions to employee engagement/ morale issues and to support our supervisors.

One insight I had during this process is that the literature on employee engagement talks about the desire for mastery on the job. For a supervisor, I think it is very tough to feel one has ‘mastered’ the art of supervising humans. I think that is why the needed interactions with staff often get postponed. No one feels comfortable. Building in to our work week these interactions as learning touchpoints or

structured feedback may alleviate some discomfort. Again, we will look for ways to make it as easy and natural as possible. It shouldn’t surprise me that communication, self-reflection and humility when we need to iterate can go a long way to changing a workplace culture.

As for words of wisdom: Matt said it best, PDIA is hard but worthwhile. It has often times felt like a looooong slog uphill. Three steps forward then one back, another sideways. But that still results in forward movement. Unexpected events can provide opportunities to move forward. The journey continues…

Thanks to all the IPP staff. Thank you Anisha for prodding us with calls. It was wonderful to hear everyone else’s progress or that we had similar issues. This is a valuable, insightful program that has made me think really, really hard at times, and I loved it.

Here is my awesome team on a recent Zoom meeting. 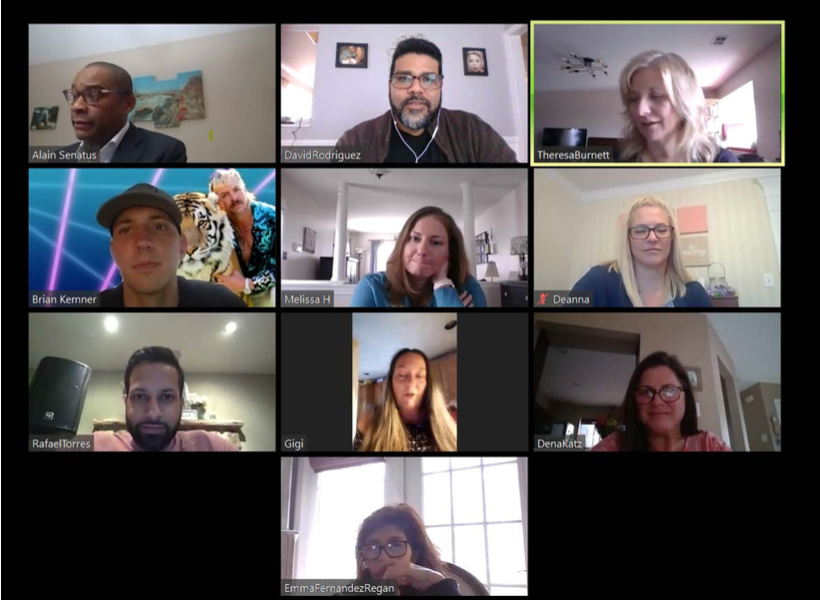