I recently wrote a blog in response to a question I was asked by a colleague about how we move from the foundation or framing workshop in PDIA processes—where problems are constructed and deconstructed—into action, and beyond that, action learning. In this post I will offer some ideas on how we do that.

First, we push teams to action quickly: We ensure that the teams working in the framing workshops can identify clear next steps to act upon in the days that follow the workshop. These next steps need to be clear and actionable, and teams needs to know that action is expected.

Second, we don’t aim for ‘perfect next steps’—just action to foster learning and engagement: The steps team identify to start with often seem small and mundane, but our experience indicates that small and mundane steps are the way in which big and surprising products emerge. This is especially the case when each ‘next step’ yields learning (with new information, and experiential lessons) and expands engagement (with new agents, ideas, and more). This is because the problems being addressed are either complicated or complex, and are addressed by expanding engagement and reach (which fosters coordination needed to confront complicated problems, and interaction vital to tame complexity) and leads to learning (which is crucial in the face of the uncertainty and unknowns that typify complex problems).

Third, we create time-bound ‘push periods’ for the next step action assignments:  After the framing workshop, the PDIA process involves a set of action iterations where teams go away and take the ‘next step’ actions they identify, agreeing to meet again at a set date and time to ‘check-in’ on progress. Each iteration is called a ‘push period’ in which team members push themselves and others to take-action and make progress they otherwise would not.

Fourth, we convene teams for ‘check-ins’ after their push periods, and ask questions: The team reassembles after the push period, with PDIA facilitators, at the ‘check-in’ date—and reflects on four questions: ‘What was done? What was learned? What is next? What are your concerns?’ Note that the questions start by probing basic facts of action (partly to emphasize accountability for action, and also to start the reflection period off with a simple report—a basic discussion to precede deeper reflection, which often needs some context). We then ask about ‘what was learned’, where we focus on procedural and substantive lessons (about all their experiences—whether frustrating or inspiring), and learning about the context.

Fifth, facilitating learning requires nudging and pushing: We find that you often need to push participants to ask deep questions about their lessons.

This process facilitates learning by the teams and by my PDIA facilitators. Both the teams and our facilitators produce written documents (short, but written) about what was learned. Over time, we can keep coming back to these lessons to ensure everyone gains a better understanding of procedural, substantive, and context issues.

As a note: People often ask where we address ‘politics’ in PDIA. That requires another blog post, but hopefully you see, in the description here, the basic process of what we call Political Economy Engagement (PEE), which we prefer to Political Economy Analysis (PEA). The action steps in PDIA always involve pushes into—or engagements with-the context and yield responses that allow one to learn about politics (who stands where, who has power, how it is exercised, etc.)

Finally, we push teams to the next steps quickly, again—which is where they ‘adapt’: You will notice that the last two questions we ask are about next steps and issues to address in taking these steps. We do not let teams get bogged down by tough lessons, but push them to think about what they can do next, adapting according to the lessons they have learned; we focus on what is important and what is possible ‘next’, given what has been learned; and we try to build and maintain momentum, given the belief that capability and results emerge after accumulated learning and engagement from multiple push periods.

In conclusion, When considered as one full iteration, the blend of programmed action with check-in questions and reflection is intended to foster action learning and promote adaptation and progress in solving the nominated problems.  The combination of learning while producing results (through solving problems) is key to building new capability. 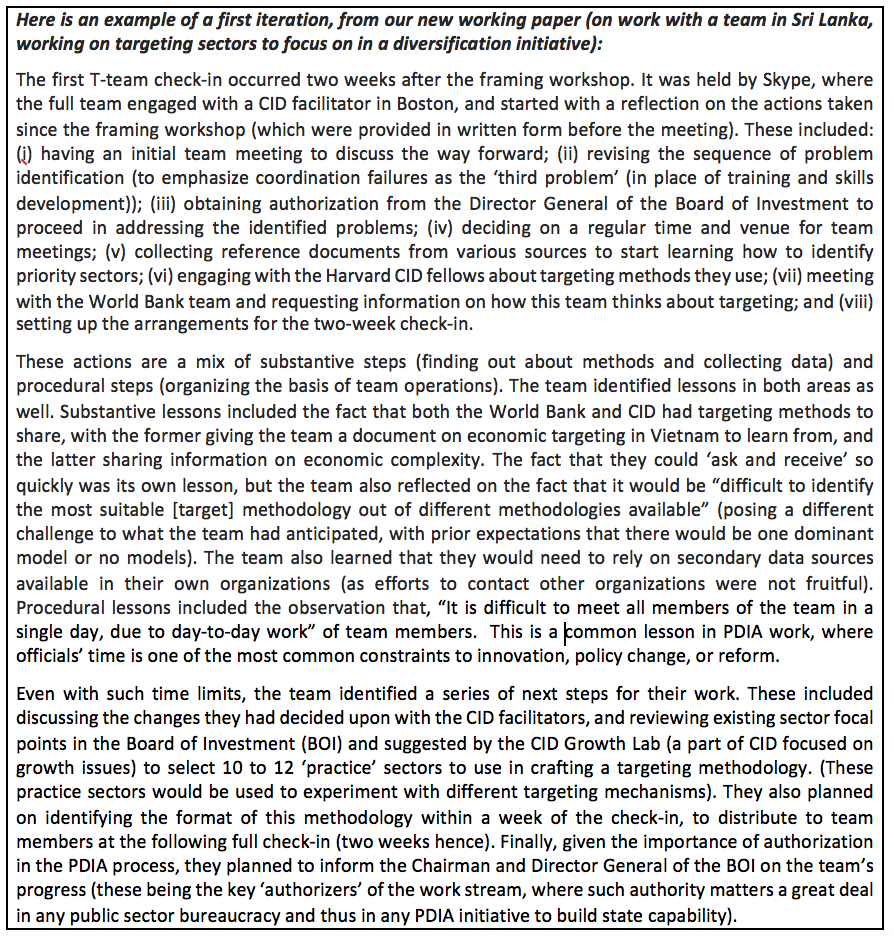 Some linkages to theory, literature and management practice

If you are interested in reading the Sri Lanka working paper, you can find the full version here.