Last week I wrote a post on how the Coronavirus pandemic, like Ebola, needs to be understood as a complex adaptive problem which requires mass learning to solve. In this post I want to focus in on one area of that learning – the behaviour change required to stop transmission, and the leadership and risk communication methods that are needed to make this happen. Coronavirus is both a biological and social phenomenon, and leaders neglect the social dimensions at their peril.

Let’s first establish how behaviour change relates to the epidemic. A couple of weeks ago a viral article called for radical action by authorities to replicate the Wuhan lockdown, in order to save lives and prevent the overload of the health system seen in Italy. A graphic was presented (below) which showed the effect of the lockdown on ‘true’ cases (the grey bars). It then took about two weeks for the effect of the lockdown to be visible in official cases (gold bars). As soon as a lockdown started, new cases plummeted. This is what underlies the lockdown policy in most countries – the only way to stop transmission is if people stay at home. Behaviour change, whether enforced or voluntary, directly translates into lives saved. 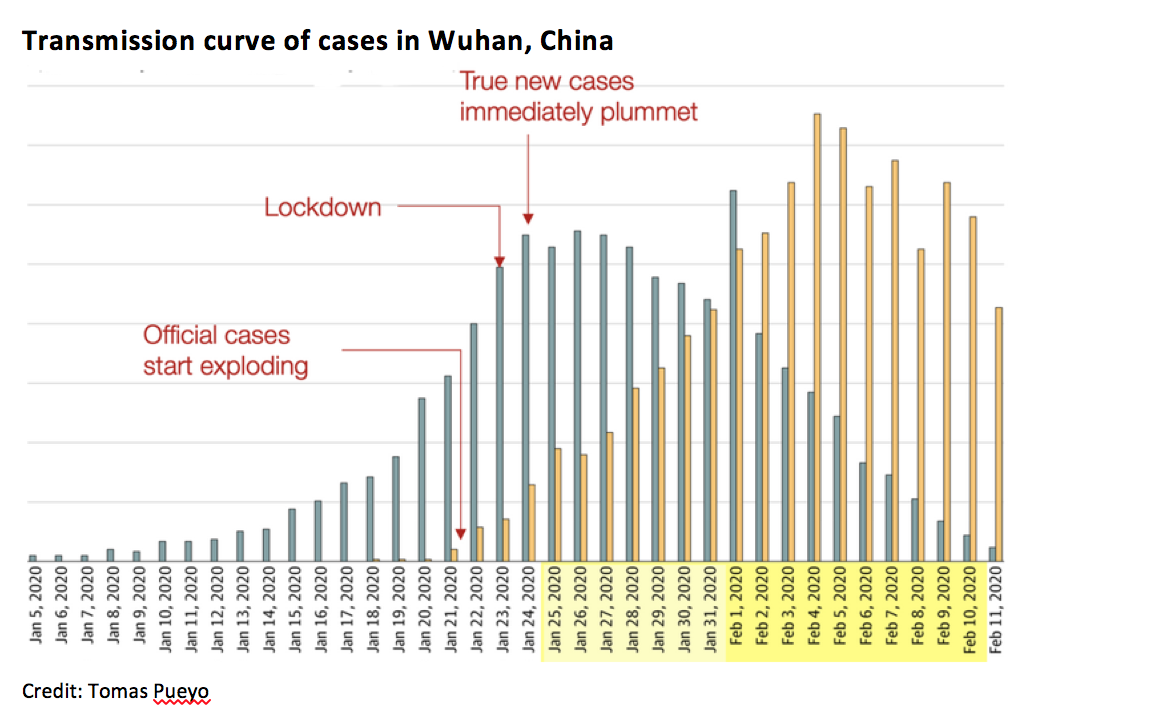 The problem is, many many people in countries with a serious number of cases are not complying with guidance about social distancing, home-isolation and closures of business and various establishments. A public and private tug-of-war is raging between those who take this epidemic extremely seriously and are urging others to observe social distancing and stay at home, and those who see over-reaction and hysteria or don’t want to change their routines. This is going to lead directly to deaths. So what is happening here? Why are leaders’ entreaties being ignored? And should the authorities simply force everyone to stay at home?

I worked in the team that coordinated messaging and communications for the Liberian’s Ebola response. This branch of the response was known as ‘social mobilisation’, working to build citizen understanding and consent, and to change key behaviours to stem the epidemic. What we learned was later documented by Princeton, and has relevance today.

It is well documented that in the early stages of Ebola, the widespread belief that Ebola was not real perpetuated behaviours (like dressing highly contagious dead bodies for traditional funeral) which helped spread the disease. People were not reporting cases, and avoided Ebola Treatment Units (ETUs). Although the affected countries lacked beds, ETUs, burial teams, protective gear, it was people’s behaviour which was paramount in the spread. This relationship between the hard infrastructure of beds, staff, equipment, quarantine, ambulances etc., and the ‘soft’ infrastructure of social networks, messaging and norms is extremely important to remember for Coronavirus too. The hard infrastructure matters hugely: when cases mount, the number of beds, healthy medical personnel and equipment will be crucial. But it is the soft infrastructure that determines how many cases develop and therefore the burden on the hard infrastructure – i.e. the shape of the transmission curve.

Why did people in West Africa disbelieve the authorities, and why are people in the West ignoring guidance to stay indoors? These are different cultures and contexts and there are many variables at play, but the area of social science known as ‘risk communications’ holds important clues. The literature on risk communication identifies three big shifts in how people engage with public health risks:

This is compounded by the way that humans perceive, or mis-perceive risk in general. As the author Dan Gardner explains, we live in an information age but our brains are Stone Age, and struggle to process the complexity around us. As Matt Andrews noted in the part 4 of his crisis leadership series on this blog, we are all subject to cognitive biases which cause us to overestimate or underestimate the likelihood of all sorts of events. Modern risk communication takes these factors into account to look for effective ways to generate public consent and understanding and, crucially, achieve behaviour change.

As I noted in my previous post, the transmission curve in Liberia peaked before the hard infrastructure was fully in place. Two other factors played a crucial role: first learning on the part of the public. As Ebola cases mounted, and people saw loved ones get sick and die, public consciousness shifted. People learned in a very immediate, empirical and human way what actions led to illness. Ebola came to their doorstep, and a critical mass of people adapted in a mass intuitive, iterative learning process. So people changed their behaviour on their own.

Second, the social mobilisation and messaging got better. Using the tools of risk communication, the team focused in on the key behaviours that would have the biggest impact on transmission – leveraging for eg the work of Vince Covello on message mapping.[2] Covello notes the importance of listening to stakeholders before crafting messages, and then focusing on consistency and repetition. Our information told us that Ebola was now seen as real, but messages were confusing, so we focused efforts on five simple behaviours that everyone could remember. The early headline ‘Ebola Is Real’ gave way to ‘Ebola Must Go’, and beating it is ‘everybody’s business’, targeting people’s sense of responsibility to each other, and creating new norms of behaviour. Meanwhile, an army of social mobilisers were trained to go door to door to spread the messages, and local leaders and influencers were recruited too – leveraging the evidence of who and what people listen to.

If things in Liberia only turned a corner because Ebola came to people’s doorstep, does this mean people only change behaviour when Coronavirus does the same? It is true that people have to go through a shift in consciousness, and there is good reason to believe that Asian countries have been more effective at containing Coronavirus because SARS built a lot of awareness. But risk communication can accelerate that shift, preventing deaths. The remainder of this post is dedicated to advice for leaders to be more effective on this vital frontier in the fight against Coronavirus.

Leaders need to make sure that they have an effective team coordinating risk communications for their situation, who understand 1) that risk communication is two-way and multi-directional engagement with the public so that they can take informed decisions to protect themselves and their loved ones; and 2) the need to pay attention to existing norms and culture, and listening to people’s concerns (remember Covello) in order to make sure messages go with the grain. After Ebola one communicator in Liberia commented:

“After talking to people and to locals working with communities, I realized that communicating risks or communicating to change behaviour is a challenging task. No matter how well-crafted the messages are they are not taken seriously, unless they take into account traditions, beliefs, religious and cultural practices. And one way to address this is through local leaders.”[3]

Some parts of the world tend to think that things like “traditions, beliefs, religious and cultural practices” only apply to other parts of the world. This is a mistake – everyone in the world has traditions, cultural practices and norms. Changing behaviour and norms is difficult and can be slow. But problematic behaviours like breaking isolation or panic buying need to become taboo. Taboos usually take time to develop on their own but effective risk communication, with proper resources, can speed this up, and also build consent for measures taken. It is, for example, probably a mistake for example to see the Wuhan lockdown as imposed against the population’s wishes – there were high levels of consent, for cultural reasons and due to experience with SARS.

Messaging needs to appeal to people’s hearts and values rather than their heads. Heads are bad at estimating risk (remember Dan Gardner), and good at rationalising the potentially negative impacts of actions like going out, socialising or panic buying. Matt Andrews gives great advice in part 5 of his series for leaders’ own communications during the crisis – avoiding terms that build anxiety. Wider official communications need to go even further, and work to build the new taboos that are needed.

Peter Sandman, a guru of risk communication, speaks of the role of outrage in this arena. In the video below, he explains how “the risks that kill people and the risks that upset people are completely different.”

Risk communication strategies for Covid-19 need to target that outrage – to work to make Covid-19 risks ones that upset more people. Messages like ‘stay indoors to reduce transmission’ should be reframed as ‘stay inside to protect your loved ones, your parents, or grandparents’ or indeed health workers. A recent video of a critical care nurse begging people to stop stripping the supermarket shelves had far more impact than authorities’ pleas delivered during a press conference.

Leaders standing behind lecterns on TV need to realise that people today don’t always listen to leaders standing behind lecterns on TV. To change people’s behaviour, risk communication needs to mobilise spokespeople who people listen to and methods that is more likely to actually change behaviour. This is the most important point of all – diversify the medium if you want to message to land.

This New Zealand video is a great example, with the right sort of messages:

But we can go further than this. If new taboos are to be created, and outrage focused on the failure to follow guidance, these will be much more powerfully spread via peer networks and influencers. Social media is part of this, but not enough. A mass of actors need to be mobilised to participate in changing minds. For example:

We don’t have to wait for thousands to die for the seriousness of Covid-19 to sink in for a critical mass of the population. Risk communication has powerful tools and principles to accelerate this process, but we are well behind the curve and not paying enough attention to the social aspects of this phenomenon – or ‘soft infrastructure’. In countries lacking the know-how and experience of epidemics, leaders need to act fast to prioritise effective, locally adapted risk communications to protect the hard infrastructure and prevent unnecessary loss of life.