How do political leaders commonly structure their roles in crisis?

Let’s start with recognizing that political leaders differ in a myriad of ways, and  political  leaders organize themselves quite differently in response to crises as well (as shown in studies like this one from Christensen et al). Different structures often  reflect different personalities, political cultures, available tools, and more.

Even with the differences, some fairly commonly observed ways politicians respond to crises. One of these ‘common responses’ pertains to how they organize their response: Many politicians centralize and try to move towards a command and control deciding and operating mode.

This is the core observation of Paul ‘t Hart, Uriel Rosenthal and Alexander Kouzmin in their 1993 classic: “One of the more enduring ideas about governmental response to crisis is the expectation that government decision making becomes highly centralized.”

In discussing “Crisis Decision Making” Hart, Rosenthal and Kouzmin detail different  models of centralization in the face of crisis. It is very worthwhile reading. I have seen three models personally, shown simply below (apologies for the rough picture): 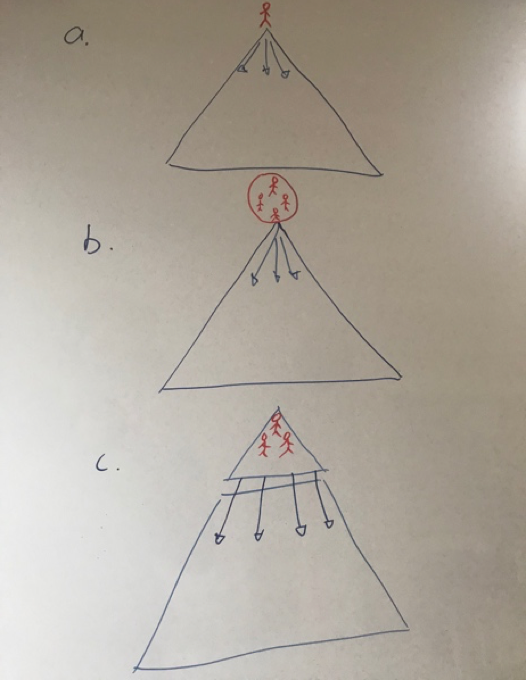 These structures all limit participation and variation in political decision-making. I thus often refer to them as ‘circling the wagons’ command and control models (where leaders gather their closest confidantes together to defend against the crisis threat, limiting the voice of those who think differently and might slow or get  in the way of the decision-making process).

These structures also link strategic political decisions to operations very tightly, often through ‘one-way’ delegation controls. Administrative or bureaucratic staff in the hierarchy often receive orders directly from the political leader, or through a tightly controlled cascading mechanism (where orders pass rigidly through layers of the hierarchy to ensure faithful execution according to the political intention). There is no room for departure in this kind of command and control approach, and (often) limited feedback up the hierarchy (from operational staff to political decision makers).

Politicians often opt for these kinds of structures to try and speed up their crisis response (thinking that it is  best to focus responsibility for the crisis and  streamline and expedite decisions and the process of ensuring commands are followed).

These politicians are correct in certain instances, as these structures can work—but  only under specific conditions, including the following:

These ‘centralization-conducive’ conditions are usually met in regard to activities that organizations have done for long periods, where the focus of work is on  ensuring reliability through compliance, efficiency through syndication, and perenity through detachment (see Ventrappen and Wirtz on When to Decentralize Decision-Making, and When Not To).

The problem is that these conditions are only met in highly specific crisis situations—where the type of crisis has been seen (with quite a lot of specific overlap) before, and where the organizations needed for response are known and can  be corralled by the political leader, and where all citizens affected can be  directly and effectively influenced by the political leader. Some examples might be  localized weather emergencies (like a tornado) or food safety failures that lead to  localized crises (affecting specific production plants or locations).

In most crises, the conditions are not conducive to centralized ‘circling the wagon’ deciding and operating models. Consider a few reasons:

An additional concern about political centralization relates to a prior blog post on  the importance of ‘keeping an eye’ on the way your crisis response impacts many different kinds of public value. It is highly likely that various important  values will be under-represented if political leaders close access to their decision-making and operational processes through a centralized command and control process. This could easily result in crisis response actions having particularly adverse effects on some values (especially damaging public value in under-represented groups). This could have significant long-term impacts.

Some questions for you to reflect on: